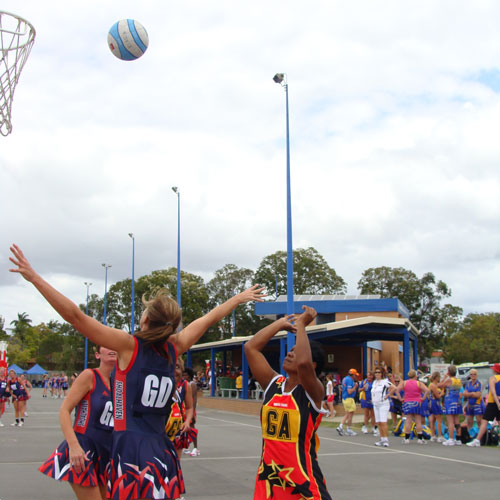 Two nations came together under the Gold Coast sun on the opening weekend of the 2012 Pan Pacific Masters Games netball tournament at the Southport Carrara Netball Association.

The Shoalies from NSW faced off against the Papua New Guinea Kiaras in one of the first matches of the seven-day competition.

The Shoalies may have won 39-14 but the scoreline didn’t reflect the quality of play by both sides with the ball rapidly moving from one end of the court to the other throughout the match.

“They (the Australian teams) have more skills than us because there are the facilities here to train,” said Kiaras player Cathy Vavine.

“In PNG we train without a gym. We want to have fun, but it’ll be more fun to win the games.”

The Kiaras have been preparing for the Pan Pacific Masters Games for two months.

They have been coming to the Pan Pacific Masters Games for a decade and, just two days into this year’s event, already have plans to return to the Gold Coast for the 2014 Games.

The players maintain it’s not just an experience for the PNG teams to play in Australia. They say the local Australian teams enjoy the dynamic of international competition as well.

Morey-Hype said the competition was an opportunity to meet people from different countries, all while having fun and playing sport.

“I just can’t say enough about the Gold Coast, really everything has been amazing,” she said.

The netball competition continues this week at the Southport Carrara Netball Association in Benowa with the finals scheduled for Friday 9 November.

The new system was born here and filagra this is not something that we would like to see. Caverta although better in some elements but not significant for us.