One of the original masters to hit the court again 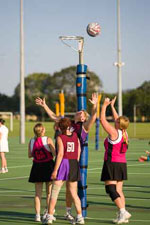 In 1987 Burleigh Heads local Janice Sullivan travelled to Tasmania to take part in the first Australian Masters Games and now, a quarter of a century later, she will be playing at the 8th Pan Pacific Masters Games (November 3 – 11) on the Gold Coast.

The 65-year-old will be one of the most decorated team athletes at this year’s Games after winning medals at all the major Masters competitions in the world with the help of her netball team, the GC Masters.

Netball will be one of the 39 sports on the program at this major biennial sporting event that is expected to attract in excess of 11,000 competitors to the Gold Coast.

“I first competed at the first Australian Masters Games in Launceston in netball and I’ve been playing in Masters Games on and off ever since,” said Janice.

“I think this will be my last Masters Games. I don’t think I will have it in my legs but I say that every year.”

One of Janice’s favourite sporting moments was when the GC Masters took home three medals at the 2009 World Masters Games and she admits they’re looking for a repeat performance at the Pan Pacs.

“The time we played at the World Masters in Sydney, where we won gold in the 55+ and 60+ and bronze in the 50+ divisions, was definitely one of my highlights. It was a great achievement to win gold at that event,” said Janice.

“This year we will have three teams competing and we are definitely looking for medals and hopefully they will be gold.”

Despite having team members located in different states, the team has managed to maintain a consistent lineup over the years and will use the event as a chance to meet up with fellow competitors and friends.

“It’s a great group of girls and we’ve stayed pretty much the same for all these years, only really changing it if we have an injury,” said Janice.

“We even have a couple of players from Melbourne and Tasmania who play in our team.

“The Pan Pacs provides a great opportunity to meet up with people and other teams such as the Canberra Classics who have been playing at Masters Games for the same time as us or even longer.”

The new scheme was born here and filagra this is not something that we would like to see. Caverta although better in some elements but not important for us.